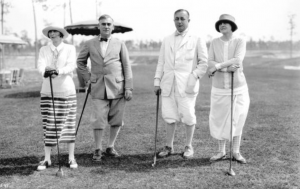 So as most of us know, golf was invented in Scotland. I’ve even heard that the reason golf has eighteen holes is that there are eighteen shots in a bottle of scotch. It may just be urban legend, but frankly, who am I to question such a great story? I know the team at this target digital marketing company enjoys a good round of golf. I think they enjoy playing it more than anything else. If you happen to be an avid watcher of golf (or even just a casual watcher of golf, like you happen to catch bits of it while you’re waiting around because someone else in the house has it on), you may have noticed that the outfits some of these golfers wear can sometimes be the most exciting part of watching the game.

A lot of what we see today, especially in the men’s fashion, we owe to the history of the game itself. As we’ve established, the game originated in Scotland, and if you’ve ever been to Scotland – especially around the area of St. Andrews, possibly the country’s most famous golf course – you’ll know that it can get rather blustery up there. So, naturally, golfers needed to wear something to keep them toasty. And that’s where those knickerbockers (commonly known just as “knickers”) came from. They’re those fancy little trousers that end below the knee. In fact, just how far they came below the knee came to matter in the early 1900s. When golf started to become popular among the wealthy in the 1920s, “plus four” knickers, which were knickers that came four inches below the knee. Fancy. Theses affluent gentlemen also wore two-toned shoes and patterned gold hoes. As we can still see today, one of the most prominent patterns that may have appeared on the apparel would have been plaid, thanks to the sports’ Scottish roots.

In the 1930’s, the move was made away from the knickers to favour linen pants. These were of pretty conservative colours and styles, because the idea was that men would go right from work to the gold course. Not a bad deal. Becoming generally more casual, golfers at this point also largely abandoned the previously golf-appropes necktie. Once the U.S. Open was held for the first time in 1933, players began to alter their clothing to suit warmer weather, abandoning some of the heavier jackets that were part of the traditional damn-it’s-cold-in-Scotland garb.

Whereas the original knickerbockered outfit included heavy jackets, shirts with stiff collars, and ties, complete with tweed caps, the modern look is much more casual. The goal these days is comfort, weather-appropriateness, and the swing-ability that the jackets allow. When the weather gets cooler, golfers have become rather partial to the “Eisenhower” jackets. These were jackets that were used in WWII, those that came in and the waist, and still have lots of room in the shoulders to allow for that perfect swing. The material used was also water resistant, so huge bonus there.

The 50s and 60s saw the introduction of the excellent colours we see in golf today, with the knitted gold shirts made to resemble the Lacoste tennis shirts paired up with equally colourful trousers. In the 70s, we get our excellent patterned golf pants (hound’s tooth was a fave) paired with the turtleneck or mock turtleneck, because this is what men were wearing to the office. The 80s saw a return to more traditional style and practical fabrics, and in the 90s, sponsorship changed the face of golf fashion, with various brand names and brand colours being flown by the players. Now, it’s all about new technologies like sweat-free fabrics and pants with zippered pockets. Happily, some players enjoy the bright and colourful outfit of the past, so that we can continue to enjoy it, too.