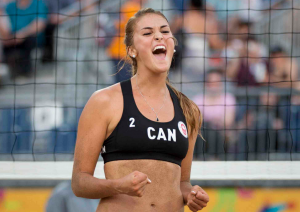 Here’s a sport in which the uniforms get a heck of a lot of attention, but not necessarily for the right reasons. You know exactly what I’m talking about, and it’s definitely not the men’s outfits, which are basically the same as those of residential roofers. It is, of course, the ladies’ wear. I think there are a few camps on this. Some people – perhaps exclusively those who happen to be attracted to women – seem to think that the outfits really add something to the sport. Eye roll. Some, on the other end of the spectrum, think that the bikinis are skimpy and inappropriate, and that the women should cover themselves up. Still others think that it’s degrading for women to be forced to wear such things, and that they should be allowed to wear shorts and a t-shirt (more on this uneducated opinion later). And then there are the rest of the humans, who don’t care what the women are wearing, because hey, they’re athletes, and they’re comfortable.

And that’s precisely why they’re wearing bikinis, actually. Because they find them the most comfortable. Many interviewed players have expressed that it’s actually way comfier for them to play in bikinis than in anything else. First of all, there are fewer places for sand to get stuck. Frankly, that’s all the reason I would need to choose an outfit. Sand is the worst, even when you’re just trying to sit on the beach. It gets everywhere; it ends up in your shoes and in your hair and in your food and stuck to your everything. I can’t even imagine how much sand those ladies must have in the most uncomfortable places thanks to all the sliding and diving they do.

Another point brought up by Kerri Walsh Jennings, an American Olympic beach volleyball player, is that beach volleyball was originally played in board shorts and swim suits, so what’s the big issue? The issue, of course, is that women are constantly sexualized regardless of what they wear or what they’re doing. And for Heaven’s sake, it can be hot as Hades in some of the places these women play! Think about the Rio Olympics. Holy jumpin’, that was hot! And they’re standing on hot sand, and running, and jumping, and sweating, and, you know, all that other stuff that volleyball entails. And what, people want them to wear long sleeves and board shorts? Why? Why would they do that? I think that if most of us had the option, we’d all opt for the bikini in that oven-roasty weather. So, just to clear up, as of 2012, women are allowed to compete in long or short sleeves or pants, but they choose the bikinis because they’re more comfortable.

Switching genders for the last paragraph here, there have also been questions about why the men have to wear shirts when they compete, and why they can’t just don board shorts. The reason for this is very simple, actually: it’s simply so that they can be identified by name and number on the back of their shirt. All makes sense, doesn’t it, when you take the time to learn!